The three-day exhibition will be held in the light of the celebration of Kuwait and Britain 120 years friendship and solid relations, which is characterized by being in constant development in various fields. 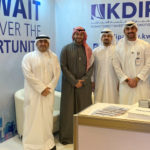