Kuwait Direct Investment Promotion Authority (KDIPA) participated in the reception of an economic delegation from the Al Ahsa Chamber in the Kingdom of Saudi Arabia, which was held on the 15th of December 2019 at the Kuwait Chamber of Commerce and Industry. Mr. Abdul Wahab Al Wazzan, Vice Chairman, Kuwait Chamber of Commerce & Industry, headed the Kuwaiti side, and H.E. Abdullatif Al Arfaj, Al Ahsa Chamber Chairman, headed the Saudi side.

KDIPA was represented by Mr. Mohammed Yousef Mulla Yaqoub, Assistant Director-General for Business Development, who shed light on the investment environment of the State of Kuwait to the delegation. 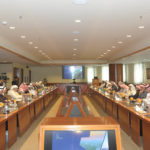