The meeting was attended by His Highness the Prime Minister Sheikh Jaber Al-Mubarak Al-Hamad Al-Sabah as a keynote speaker and guest of honor.

KDIPA was represented by Sheikh Dr. Meshaal Jaber Al-Ahmad Al-Sabah, Director General, who participated in the first panel under the title “The State of Kuwait: Sustainable Development and Growth”, where he reviewed the advantages and the climate of investment by the State of Kuwait, and the role of KDIPA in attracting foreign investments to the State of Kuwait. Other participants in the panel were Mr. Yousef Al-Obaid, Deputy Governor and Board Member of Central Bank of Kuwait, Dr. Osama Al-Sayegh, Executive Director of Energy and Building Research Center of Kuwait Institute for Scientific Research, and Eng. Loulwa Yassin Saif, Manager of Project Tendering and Bid Assessment in Kuwait Authority for Partnership Projects. The forum included five other panels that addressed timely topics and investment opportunities. The topics included: “Direct Investment and Know-How Transfer: Supporting the Industrialization Plans in the Arab World’, “Managing the Digital Transformation: Challenges and Opportunities of Disruptive Change”, “Infrastructure Megaprojects: Government as an Enabler for Inclusive Growth”, “Food Industry: Building Partnerships for Sustainable Agriculture and Food Security”, And “Shared Responsibility for Inclusive Development: Perspective of Arab-German Cooperation, Political & Economic Challenges”.

More than 60 Kuwaiti personalities participated in the forum from both the public and the private sector, as well as participants from a number of Arab countries including Saudi Arabia, Qatar, Egypt, Lebanon, Jordan and Sudan. 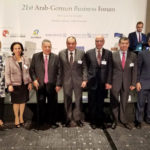 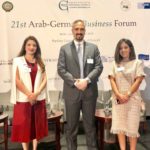