KDIPA alongside the U.S. Chamber of Commerce co-organized a meeting for U.S. companies

Kuwait Direct Investment Promotion Authority (KDIPA) alongside the U.S. Chamber of Commerce co-organized a meeting for U.S. companies to discuss the latest legal developments and investment opportunities available in the State of Kuwait for a report which will be published by the U.S Chamber of Commerce about Kuwait’s investment climate by the end of the year. The meeting took place at KDIPA’s Headquarters on March 19th, 2019.

H.E. Sheikh Dr. Meshaal Jaber Al-Ahmed Al-Sabah, KDIPA’s Director General, welcomes the guests and gave an opening speech that highlighted the importance for such meetings to further enhance collaboration between all parties. 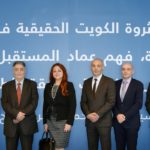