A delegation from Kuwait Direct Investment Promotion Authority (KDIPA) headed by the Director General Sheikh Dr. Meshaal Jaber Al Ahmad Al Sabah met with investment organization and companies in Singapore during the period of 17-20 May, 2017.

During the visit, the delegation met with Singapore’s Minister of Trade and Industry Mr. S Iswaran and the Minister of State for Foreign Affairs and Defense Dr. Mohammed Malik bin Othman to strengthening the bilateral ties between the two countries.

The delegation has also met with the Economic Development Board, the Accounting and Regulatory Authority and with the IE Singapore to discuss the economic and legislative improvements, as well as the investments opportunities in Kuwait.

KDIPA’s DG has also participated in a seminar at the Singapore Business Federation about the investment climate in Kuwait and what makes Kuwait an attractive destination for investing and doing business with regards to Kuwait Direct Investment
law No. 116 of 2013. 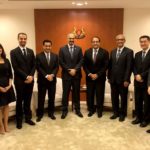 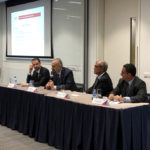 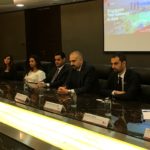